When we started beekeeping one thing we read in multiple places was that getting an observation hive was a great way to learn. An observation hive is basically a glass sided bee hive so that you can look into it without putting on a bee suit and disturbing the bees.

Michael Bush has a great page on what to consider in observation hive design. We used that page and some advice from the beesource forums to design a single wide 6 frame hive. We did an initial sketch in Google Sketchup:

After thinking it over and detailing the design we defined all the wood sizes we needed and had them cut for us. We also ordered two framed glass panes from a picture frame supplier. With all the supplies ready we got to work. We build the two sides, one with a hole in the middle that will serve as the bee entrance: 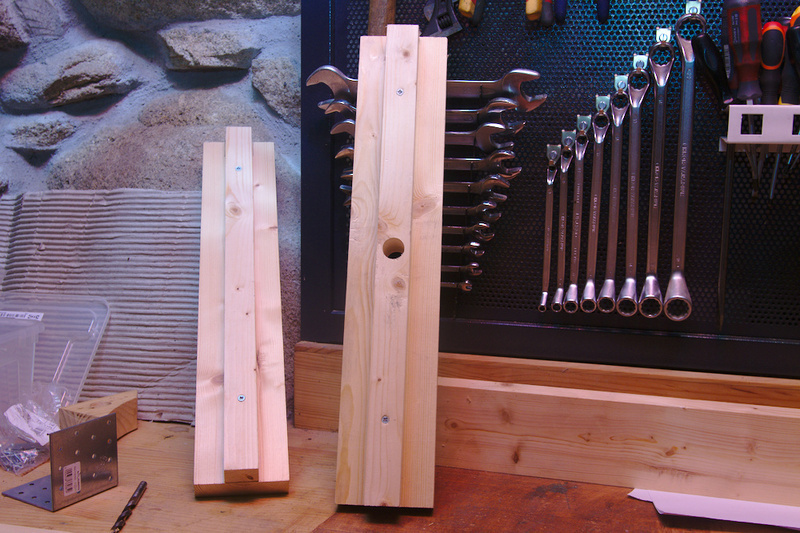 We quickly built the basic frame, using some right angle metal pieces for strength and two threaded rods at even spacing to attach the frame supports and to make sure the top bar was straight. 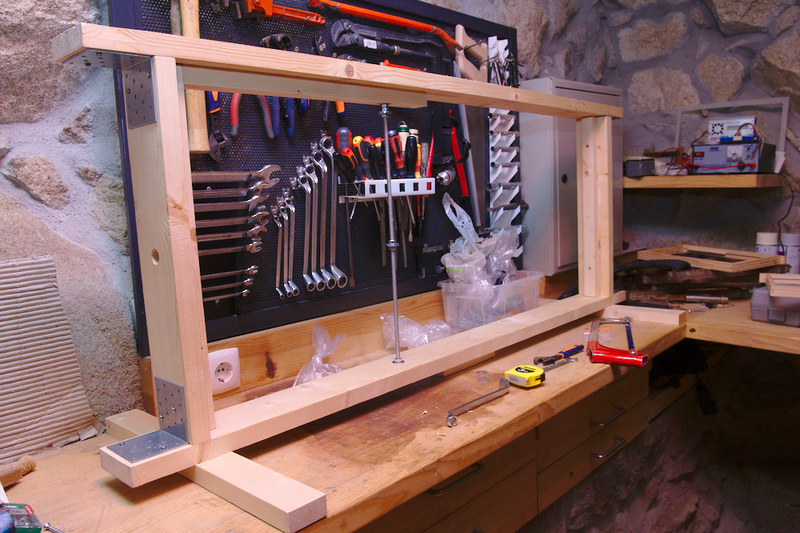 This was our first test fit of everything. 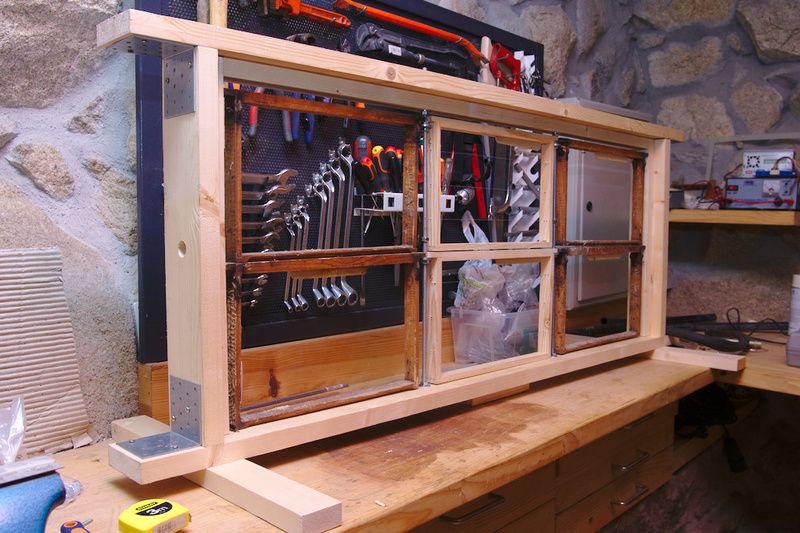 Two lengthwise pieces on top and bottom will seal the gap against the glass frames. 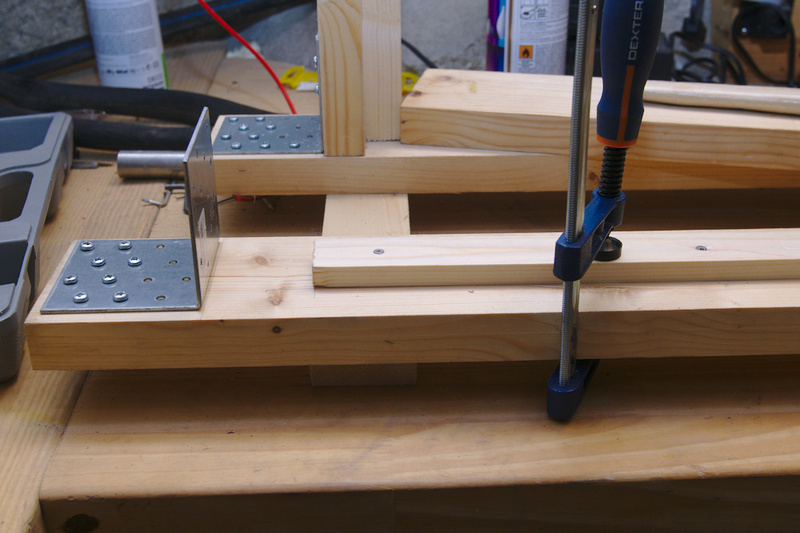 We also opened up the entrance side hole to 31mm and fitted a brass hose connector so we can then attach a hose to connect the hive to the outside. We had to use an adjustable drill bit as we couldn't find a 31mm or 32mm bit. These things suck for this job. The hole was already cut at a smaller size so the center part of the bit that guides the hole had nothing to connect to and since the drill only cuts on one side it becomes unstable. Because the bit is so long it swiveled pretty easily even when using a drill press. Only after getting the initial depth done did the drill stabilize as it became locked into its own hole. Next time we need to plan ahead more and use the adjustable drill for the initial hole and them finish the inside with the smaller bit. 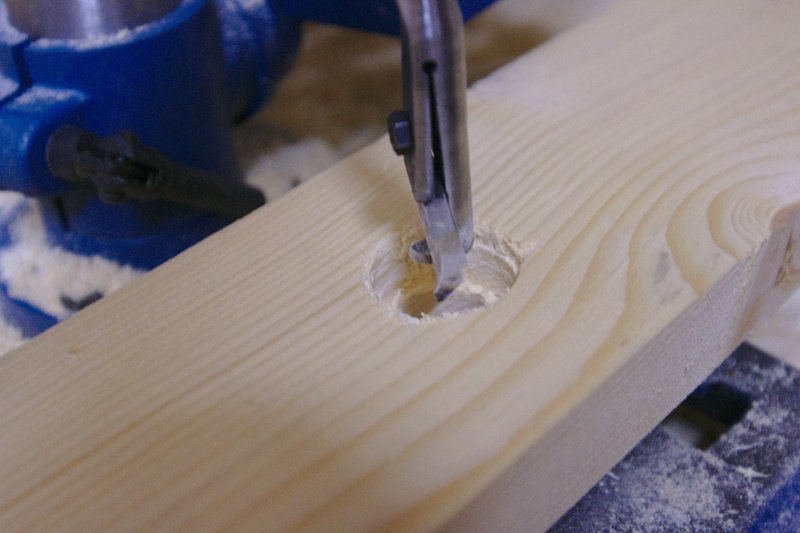 A first test fit with everything in place. We made some frame supports with folded sheet metal held in place between two bolts and two washers on the threaded rods. On the right and left sides the frame supports are also folded metal and screwed in directly to the wood. We're still considering making these a bit better. They only have a stop for the frames in the back so the frames can still fall forward. 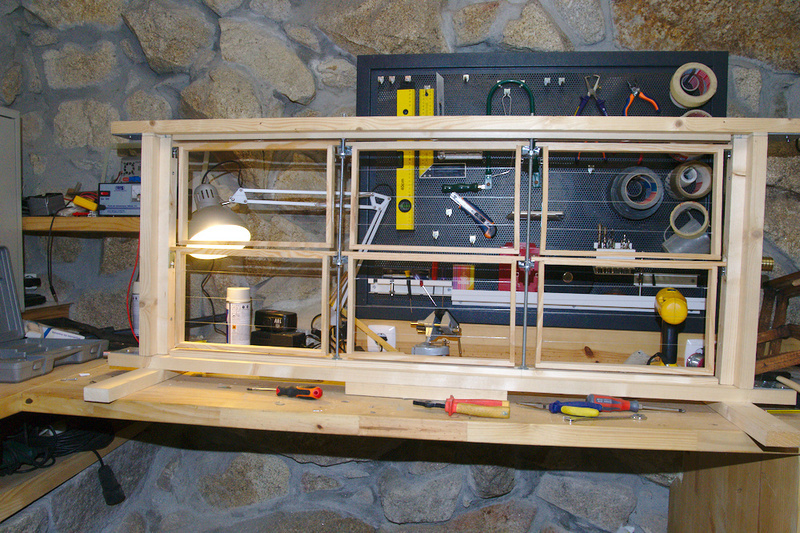 The glass frames were attached with some simple metal holds on top on both sides, and three nails on the bottom plank to make sure the glass frame fits snuggly (it's not nailed in). 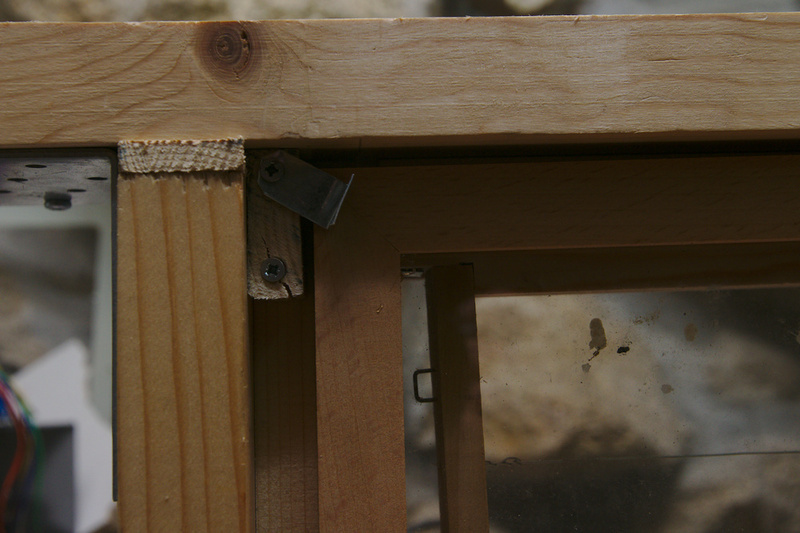 Here's the final assembly. Note the cork top in the middle of the top bar. We drilled 19mm holes aligned with the center of each of the top frames. That way it's easy to open/close them for adjusting ventilation or to setup a rapid feeder. 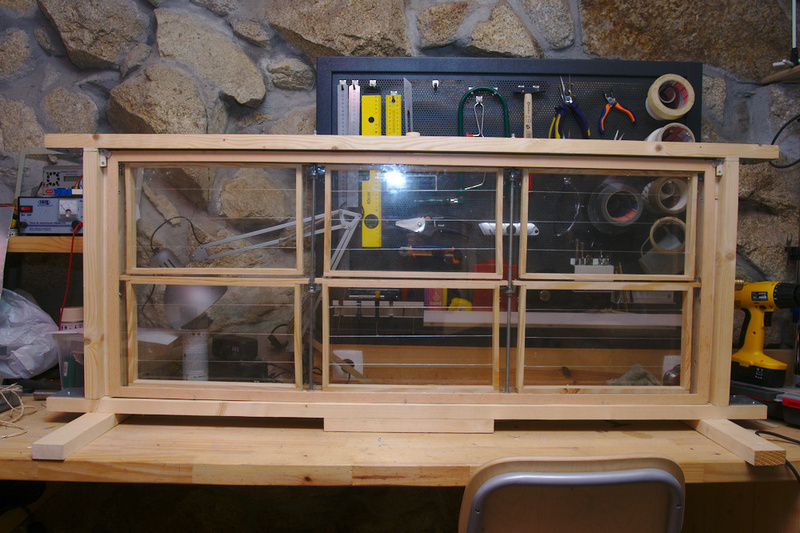 After getting the finishing touches done we'll be putting it in a small building on the farm and routing a one inch transparent hose from the entrance through the wall of the building so the bees can get in and out freely without being able to enter the building itself. We'll probably do a spring split into the observation hive to be able to observe the bees make a new queen.

We've been running foundationless frames on all our hives. It's less work and may have some health benefits for the bees. To do this though we've had to retrofit comb guides to our regular bought frames. We don't make our own equipment. Our hive supplier is cheap enough and we're small enough that it wouldn't make sense to start making them, so we have to modify them to our needs.

We started by using tongue depressors to press into the groove carved on the inside of the top bar of the frame that would normally fit the wax sheet. We found that two of them fit snugly into the frames and initially just pressed them in by hand and started using them. What we found was that even after the bees had put propolis on the depressors they would still sometimes fall out of the frame, probably once the hive got hot and the wood expanded. We had a hive lose a full comb probably as a combination of wood expansion and the comb's weight. Our method for these is now to put in a small amount of regular wood glue into the groove and then press the tongue depressors in. This seems to work fine and we haven't had one fail yet. 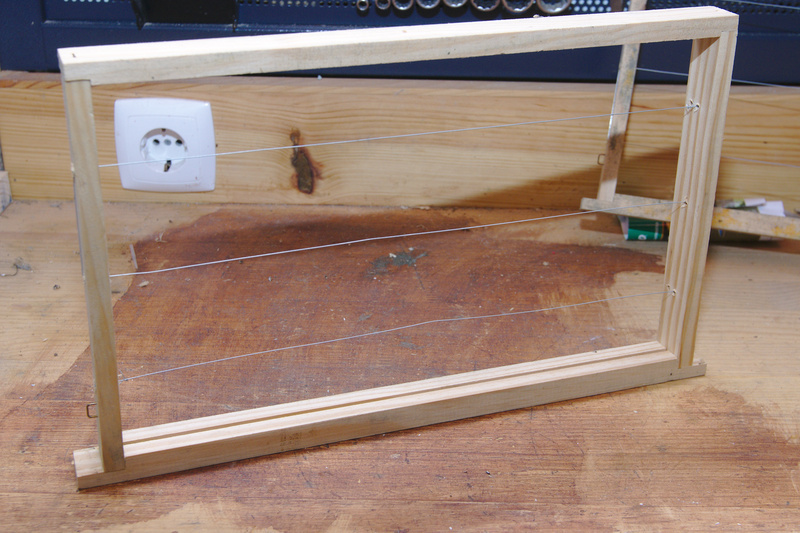 Our next issue was that sometimes the bees would actually build comb on both sides of the tongue depressors, so two combs to a frame, instead of using it as a guide. We had this happen with a new swarm. Once they get into that rhythm it's hard to break them off of it as they'll base the location of the next comb on the distance from the previous one, again ignoring the guide on the frame. We've recently tried a different approach which was to glue and nail a wedge to the full length of the frame. We had a woodshop take a 2cm by 2cm section length of pine wood and cut it in half lengthwise between opposite corners. This gave us the triangular section wedge to glue onto the frame. We cut it into several pieces with the length of the internal frame width and glued it on with wood glue and then nailed it in. The nailing was the hardest part, and a nail or staple gun might be ideal for this. So far we've only done a 10 frame box to test this in one of this year's swarm boxes. 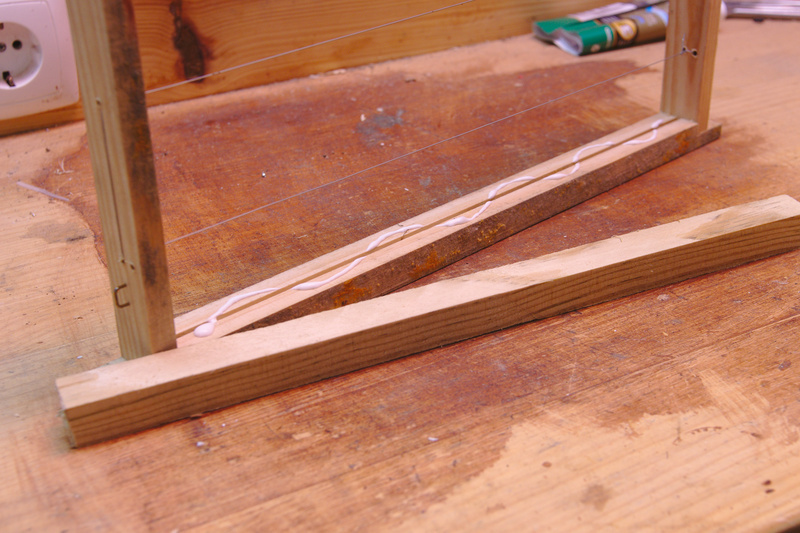 The end result are two types of foundationless frame that we use in our swarm traps. 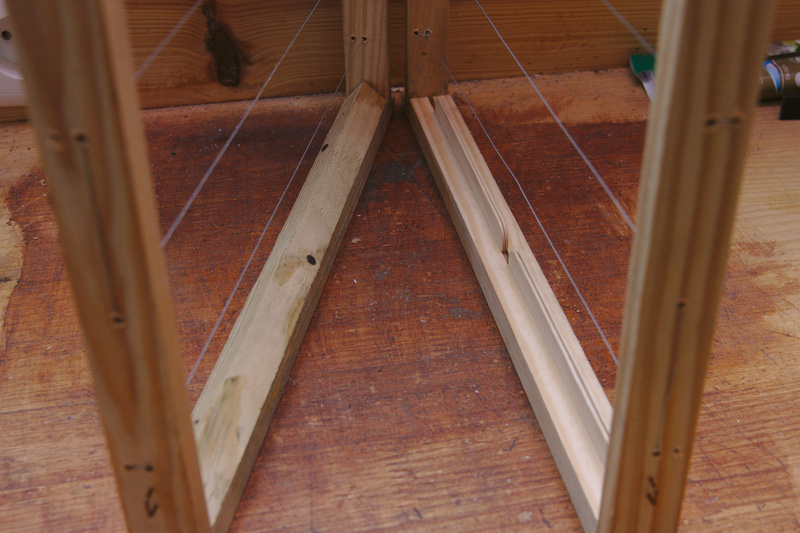 When the bees take the hint and follow the guide the end result is nicely drawn pristine white wax. 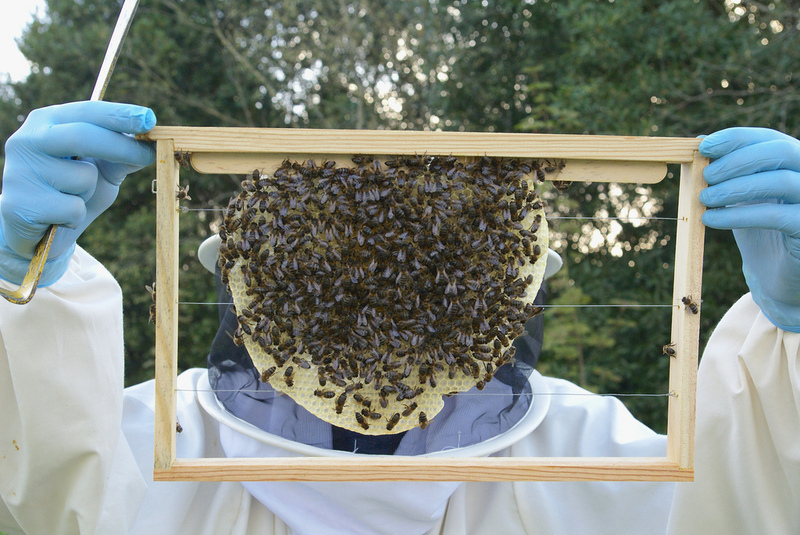 As I was looking at a piece of leftover metal sheet from building the owl box I realized we could use it to build a solar wax melter. Bees make comb to store honey and polen and as "wombs" for new bees. Once they've reused the comb a couple of times if you take it out and extract honey from it what's left isn't just wax. It'll have left-over cocoons, polen, etc. To get clean wax you need to split those things up and the easiest way is to just heat it up making the wax fluid. You can do this on a stove but why pay for the energy to do it when the sun can provide it. A solar wax melter is a very simple device. It's just a small green-house of sorts where the comb is put on a ramp so that the wax will drip out as it's heated.

The idea here was reuse. We started with an old wine box, the leftover sheet metal and an old plastic container to collect the wax. We're probably going to replace the plastic container with a glass one as heated plastic can give off harmful chemicals. 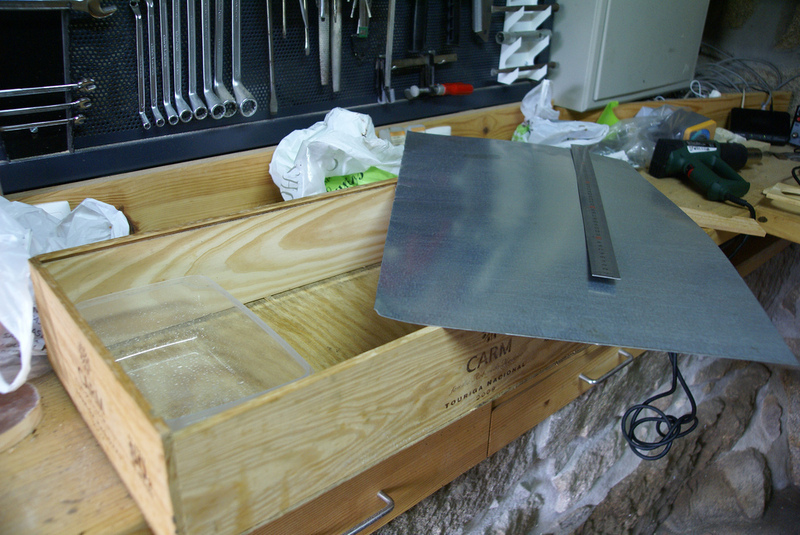 After a lot of measurement and back and forth we decided to set the metal flat on the box and just create the angle by putting some feet on one side of the box. So we folded the metal so as to create a funnel like exit into the box, to try and make sure only the liquid wax gets through and put it inside the box. 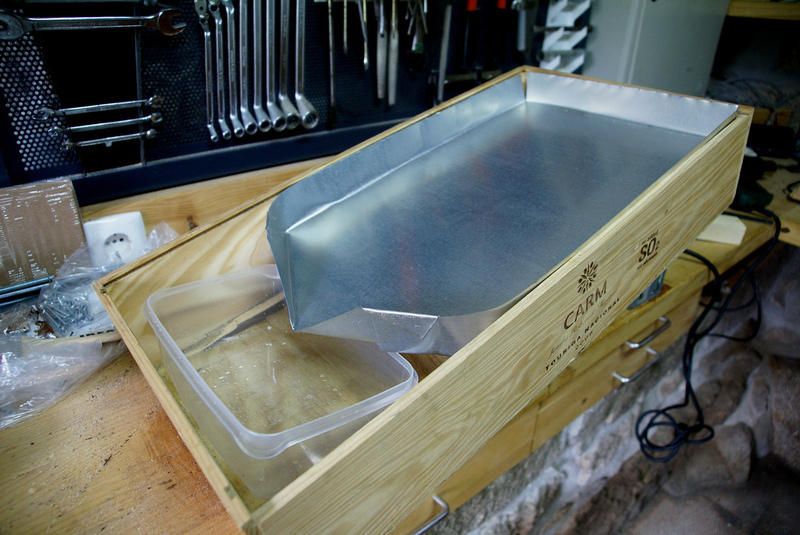 We used the dividers from the wine box nailed to the sides as feet, setting the box up at a fifteen degree angle. To finish it up quickly we bought an Ikea picture frame, took out the back and just set it on top, using the frame itself to keep it in place. 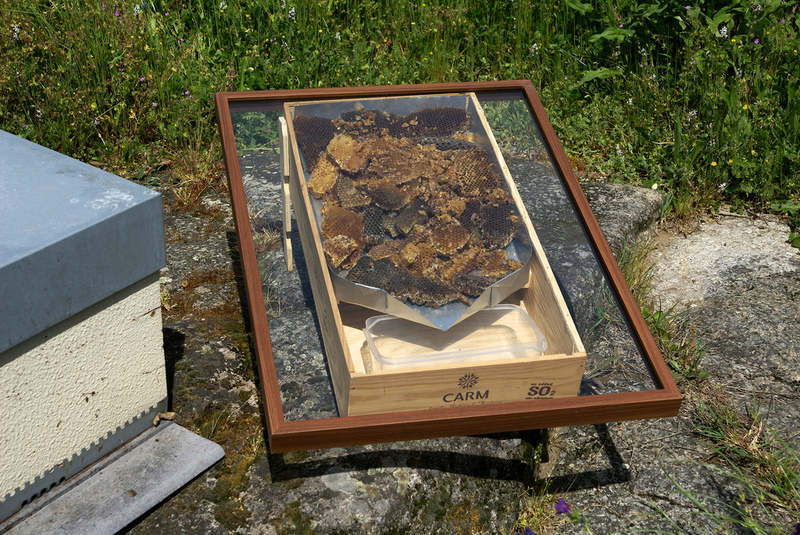 That proved the concept pretty well and we got good wax right away. 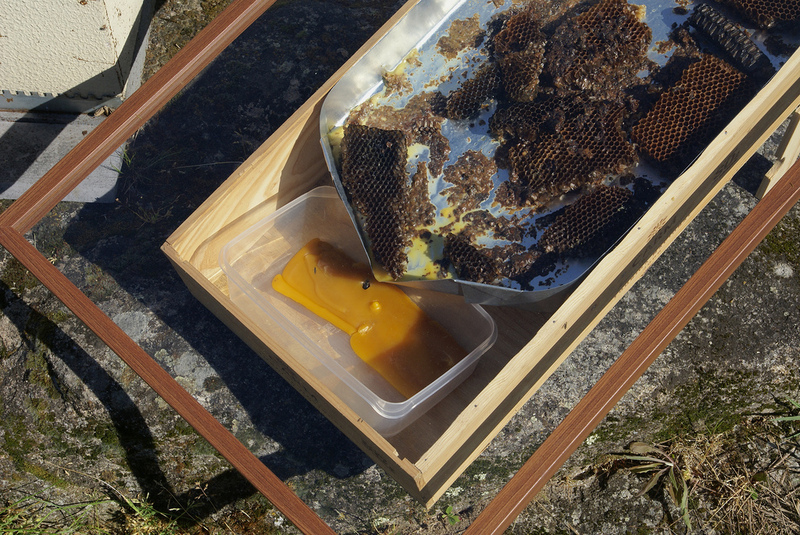 Eventually after being outside in the rain for a few days the Ikea frame self-destructed and so we did a simple fix. We took the glass out of the frame and glued a small block of wood to one side so that it holds the glass on top of the box without sliding. This has been working fine and the fact that the glass is much bigger than the box should help protect it from rain. 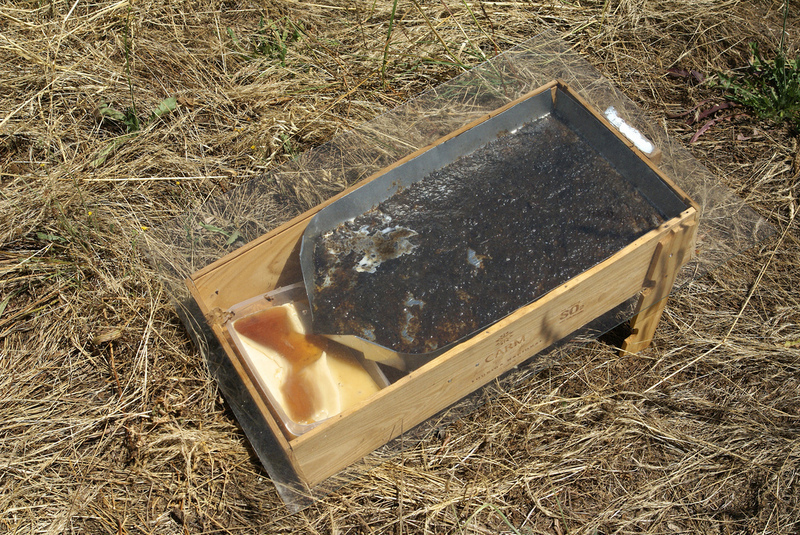 We've been putting in old wax and bits that we cull from hives and have built up a nice block of wax. It's mostly clean although a couple of bees have been able to get through the crack at the bottom and end up stuck in the wax. 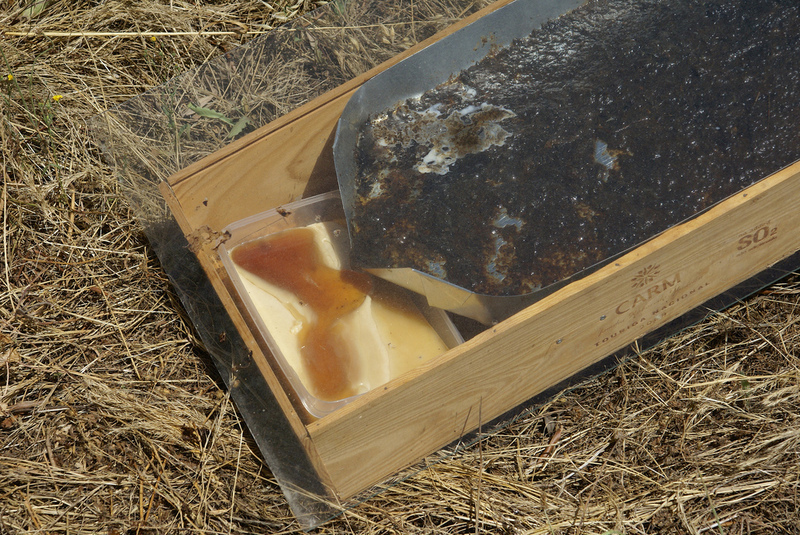 The smell of melting wax seems to attract bees, especially scouts looking for a place to swarm into. This year two of our swarms moved into bait hives that we setup next to the wax melter. An unforeseen upside. 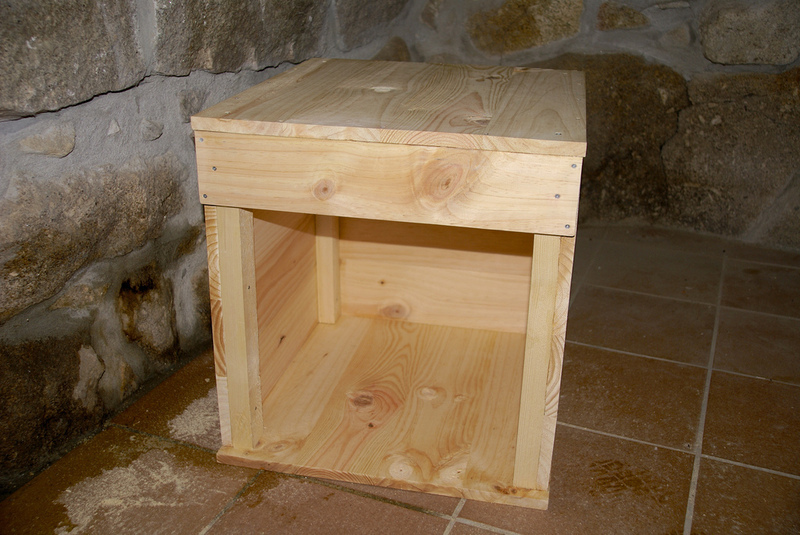 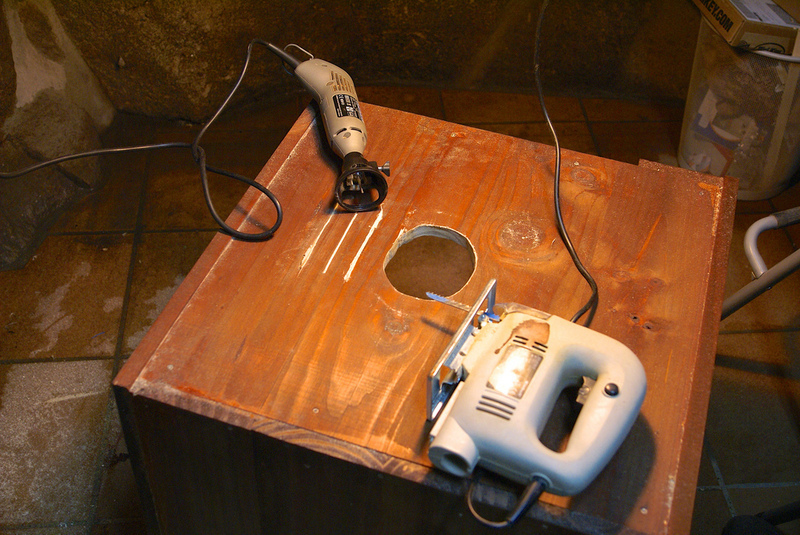 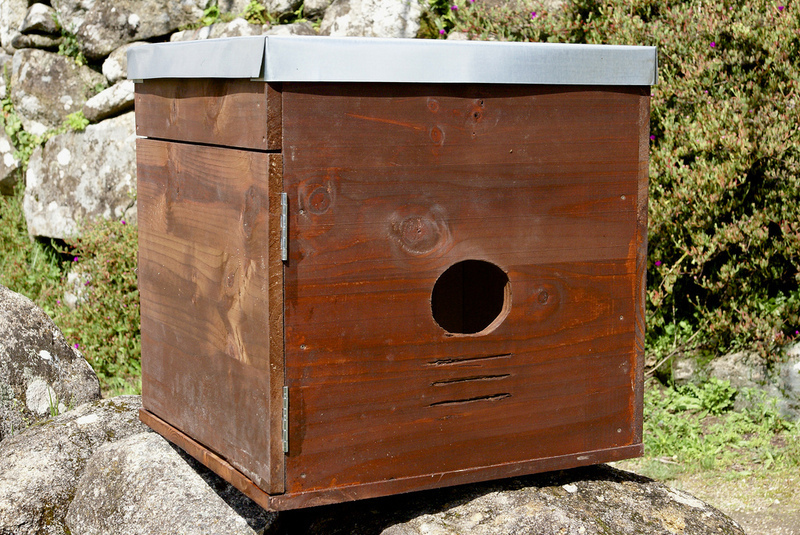 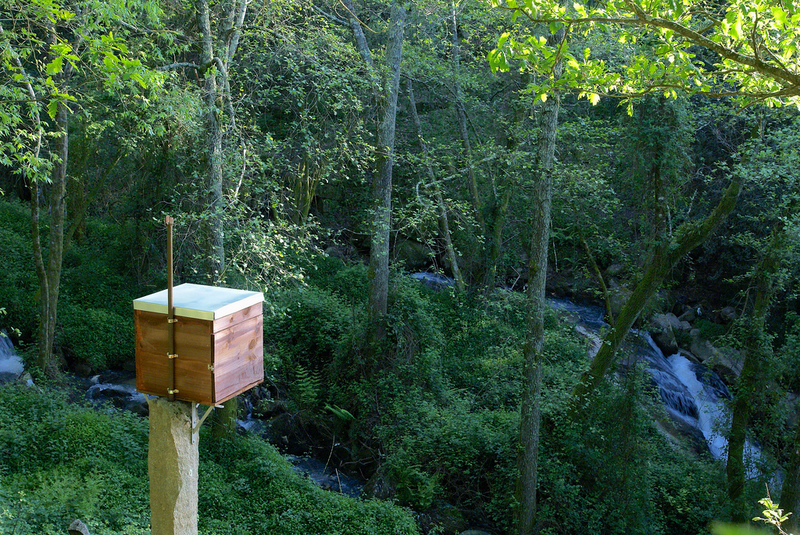 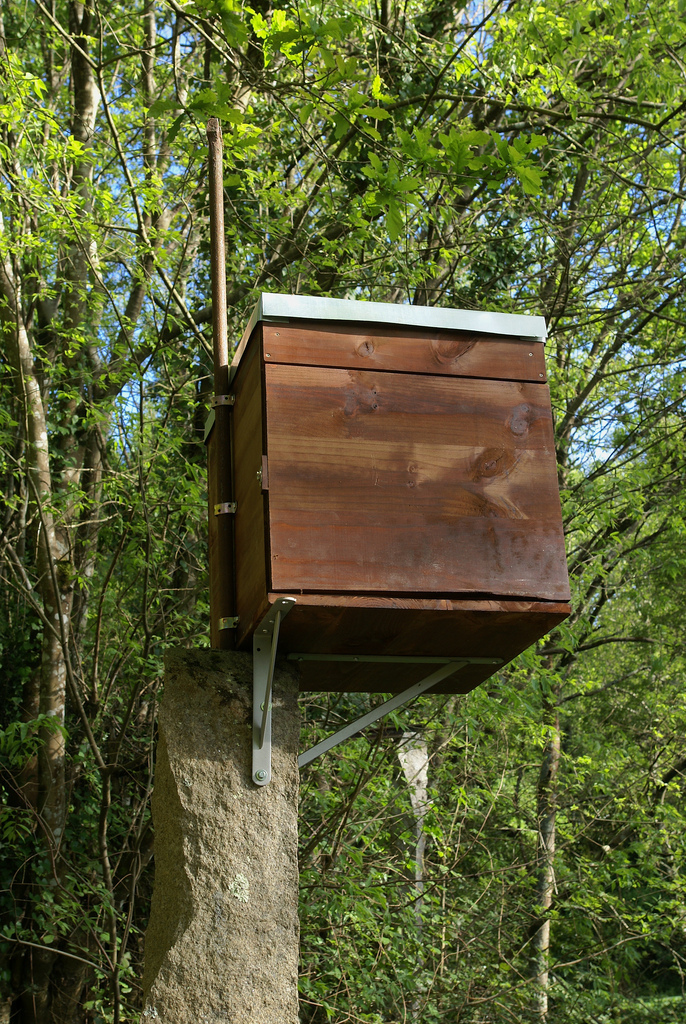